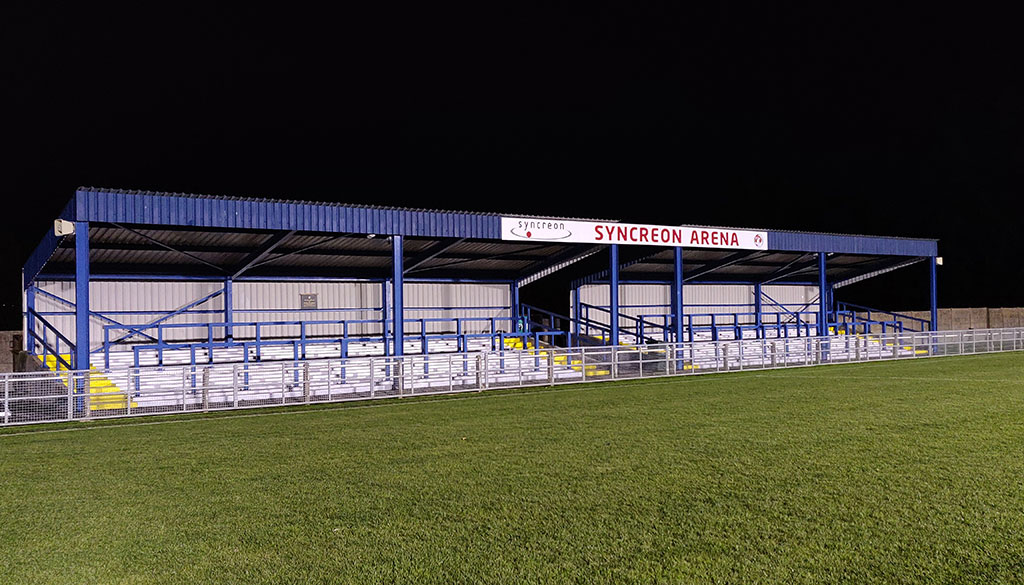 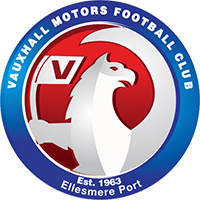 Vauxhall Motors F.C. was founded in 1963, shortly after the opening of the new Vauxhall Car Plant in Ellesmere Port. Early in its history, they played in the Ellesmere Port League and the Wirral Combination, but soon grew too strong for those leagues. By 1970, the club had achieved several promotions and played on the company-owned Hooton Park. By 1987 however, it had opened its own ground, Rivacre Park, where the club plays today. The opening of the new ground was especially important as then England manager Bobby Robson brought a number of former international stars for the opening game.

On the pitch, the club also started finding some success, winning its first West Cheshire League championship in the 1985–86. Soon after, they reached their first Cheshire Amateur Cup Final and triumphed in the Wirral Senior Cup. These accomplishments did not go unnoticed, as the club successfully applied to join the North West Counties League for 1987–88. They easily won the league's Second Division in their second season, and finished fourth in the First Division in 1989–90 before winning the NWCL Cup the following season beating Darwen 2-0.

Soon after the club took the decision to move back down to the West Cheshire League, where the club finished in third place in the two following seasons. However, in 1994–95, the club won both divisions of the league – only the third time any club had achieved that in the 125-year history of the league and accepted back into the North West Counties League. Just as before, they easily won the Second Division, but did not have the best of seasons in Division One, although they did reach the semi-final of the Cheshire Senior Cup. They continued to play in Division One, and reached the final of the NWCL Cup, losing to Kidsgrove Athletic.

The 1998–99 season was the team's best to that point, reaching the fifth round of the FA Vase, earning its best ever league position in third place, and won the NWCL Cup against Prescot Cables. However, the next season was even better, with the team reaching the FA Vase semi-finals and winning the NWCL title, thus earning a spot in Division One of the Northern Premier League. The reserves also enjoyed a successful season, winning The Pyke Cup for the first time in the club’s history.

The club enjoyed considerable success in the Northern Premier League as well, earning promotion to the Northern Premier League Premier Division in their first season, and finishing in second place in that division. The team continued to play well, with its high point coming when they defeated Queens Park Rangers in their first appearance in the FA Cup first round, before losing in the next round in a televised match against Macclesfield Town in November 2002. The season after, the club hired manager Owen Brown and they earned promotion to newly formed Conference North in 2004.

The club finished 21st in the 2007–08 season, and were due to be relegated but after Nuneaton’s liquidation and the Conference's decision to expel Boston United, the club were reprieved. In the 2009–10, the club finished 20th. However, due to the earlier resignation of Farsley Celtic and the subsequent demotion of Northwich Victoria due to financial troubles, the club was again given a reprieve.

In the 2010–11 season, they reached the First Round of the F A Cup, but were unable to repeat the success of eight years previously, drawing 0–0 away to Hartlepool United before losing the home replay 1-0. In May 2011 it was announced that, due to a promotion at work, Carl Macauley was stepping down from his role as manager and that his assistant Anthony Wright would be taking over the reins with former Notts County, Peterborough United, and Vauxhall striker Gary Martindale as his number two. However results didn't go as hoped despite assembling one of the strongest squads the club had seen, resulting in Carl Macauley making a shock return to the Rivacre Park hotseat in November 2011 with Anthony Wright reverting to Assistant Manager and Gary Martindale to Coach.

In March 2014 the club announced its intention to withdraw from the Conference North due to "ever-increasing costs" leaving the club with no alternative but to return to the West Cheshire League to stabilise and rebuild the club once again. A week after the announcement long-serving manager Carl Macauley left to become Assistant Manager to Steve Burr at Chester F.C.

Only four of the founder members of Conference North remained in the league for its first ten seasons: Gainsborough Trinity, Harrogate Town, Stalybridge Celtic and Vauxhall Motors. Vauxhall's league positions in those season's were 15th, 18th, 15th, 21st, 11th, 20th, 17th, 18th, 12th and 18th. On 26 April 2014 Motors played their last game in Conference North for the foreseeable future.

In May 2014 former Vauxhall favourite Alan Schumacker was appointed as first team manager. The former Motors defender was a member of Alvin McDonald's all conquering North West Counties League championship side and had been reserve team manager since the summer of 2010. He appointed Kevin Baker as his assistant and Steve Foulkes as coach for the coming season. At the end of that season, the club had triumphed in the Wirral Senior Cup for the third time in five seasons, having won their first Cheshire Amateur Cup the previous season.

In November 2016 the former Burscough captain, ex A.F.C. Liverpool assistant manager and Prescot Cables Reserve team manager Karl Bell was appointed the club’s new manager, assisted by Dean Evans. Karl had to rebuild a team in mid-season and as a result, they finished a disappointing 8th. Last season however, they remained unbeaten in the league until just before Christmas but sadly fell away towards the end of the season, as they finished second in the league and also runners-up in both the Cheshire Amateur Cup and Pyke Cup. Those disappointments saw Karl relieved of his duties after the penultimate game of the season.

Taking over the reins at the Syncreon Arena as the club re-joins the NWCFL is former Conwy United and Cammell Laird boss Mick McGraa. Mick, a former Motors player, took over at Cammell Lairds in October 2016 with no players and no victories. Despite a decent run towards the end of that season, he was unable to prevent the club from relegation but last season he almost guided Lairds to promotion, losing out in the final play-off away at Whitchurch Alport in mid-May.

From the Wallasey Tunnel (Kingsway)
From the tunnel toll area follow the road straight onto the M53. Exit the M53 at junction 5. Take the third exit off the roundabout (sign-posted A41 Chester). At the first set of lights turn left into Hooton Green. At the 'T' junction turn left into Old School Land. At the next 'T' junction turn right onto Rivacre Road. The ground is on the right hand side.

Nearest Bus Route to Ground: None